One man, two votes! Georgian houses of Dalston Terrace to be demolished.

The Chair of Hackney's Planning Committee, Councillor Vincent Stops, used his casting vote on a tie break to approve demolition of the surviving 13 Georgian houses in Dalston Terrace last Wednesday 5th March. It was democracy inaction, and resonant with deja vu. 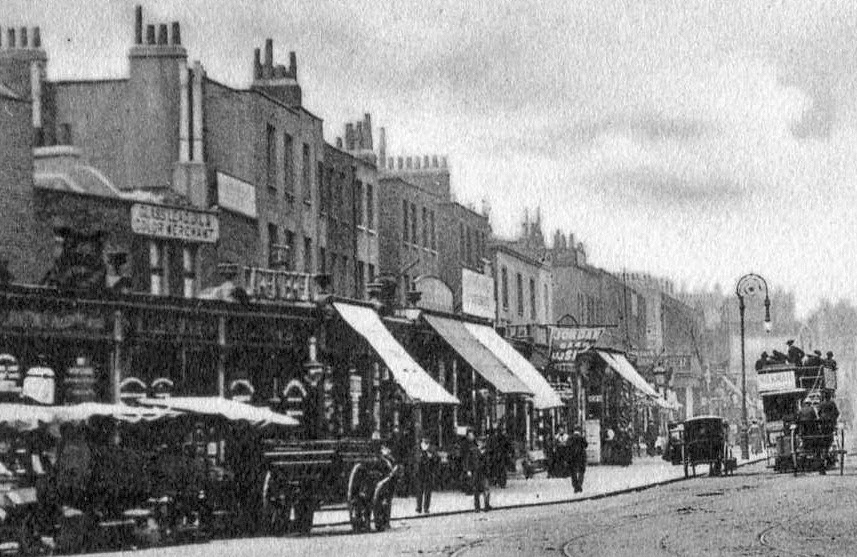 The Council's officers reported that there had been 785 written objections to the planning application, by  Hackney's development partner Murphy, to demolish the 200 year old houses. You can read OPEN's objections here.  Hundreds of local people, including Dalston architect Lisa Shell, objected as well as three local Conservation Area Committees, The Hackney Society, the Spitalfields Historic Buildings Trust,  the East London Preservation Society, the Heritage of London Trust, SAVE Britains Heritage, the Victorian Society, the Georgian Group and The Society for the Protection of Ancient Buildings(SPAB) . All urged restraint and that Hackney consider the issues further. But, with Hackney and Murphy's haste to proceed, there was to be no stay of execution.


This video shows the appalling neglect and vandalism of the houses by the owners and, despite its promises to us, Hackney's neglect and indifference to their fate and its community's views

The Council officers report to its Planning Committee was telling. Hackney pleaded it own negligence, in failing to maintain and protect the houses which had  "been in an unheated and damp condition for years", to explain why they are now incapable of repair and redemption. Hackney had in effect, despite the lofty public pronouncements of its politicians, and numerous officers' reports over many years, just stood by and watched the houses decay. It had even, at public expense, demolished three of the houses itself and dressed others in funereal black paint, whilst they were in private ownership, . 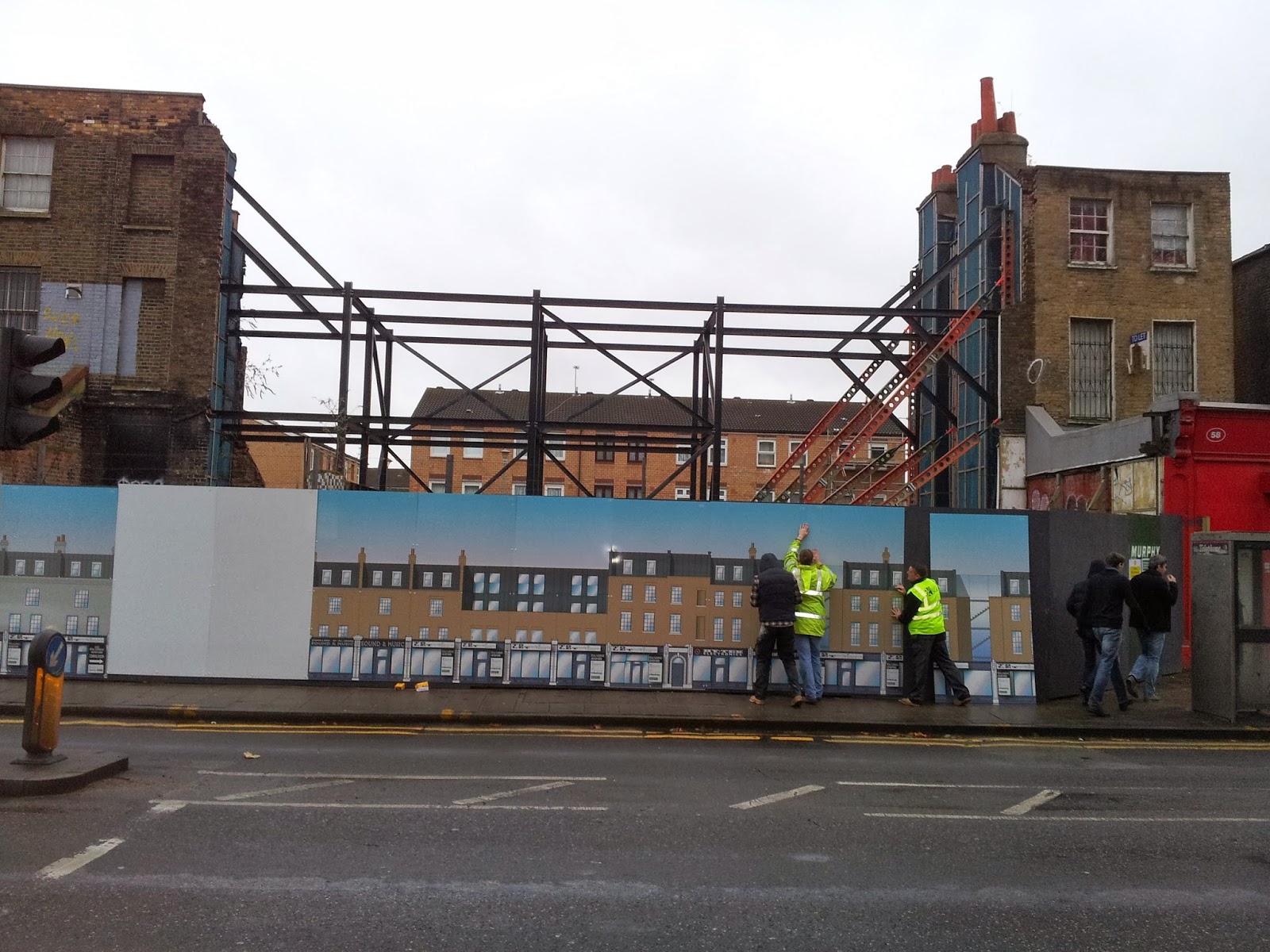 In responding to each planning objection, Hackney's officers sided with the developer, Muphy's, opinion about the irredeemable condition of the structures, even against the advice of Hackney's own appointed independent expert, Alan Baxter LLP. 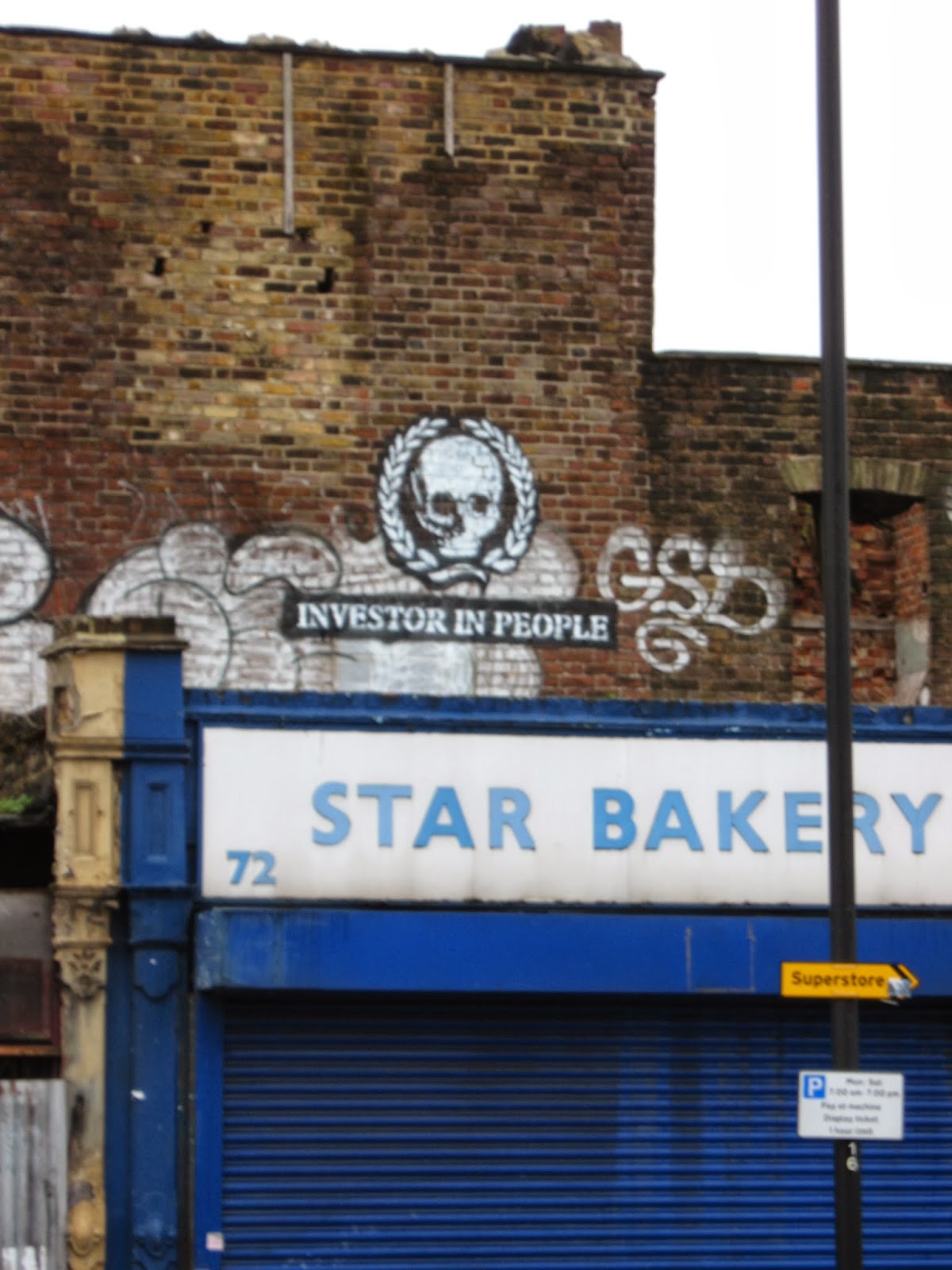 Despite Hackney's public commitment to a conservation-led scheme, in which the design is subservient to the buildings heritage, it is clear that the plans are commercially led, a demolition and new-build scheme, in "heritage likeness". Little value has been put on the heritage, cultural and economic value of restoration. 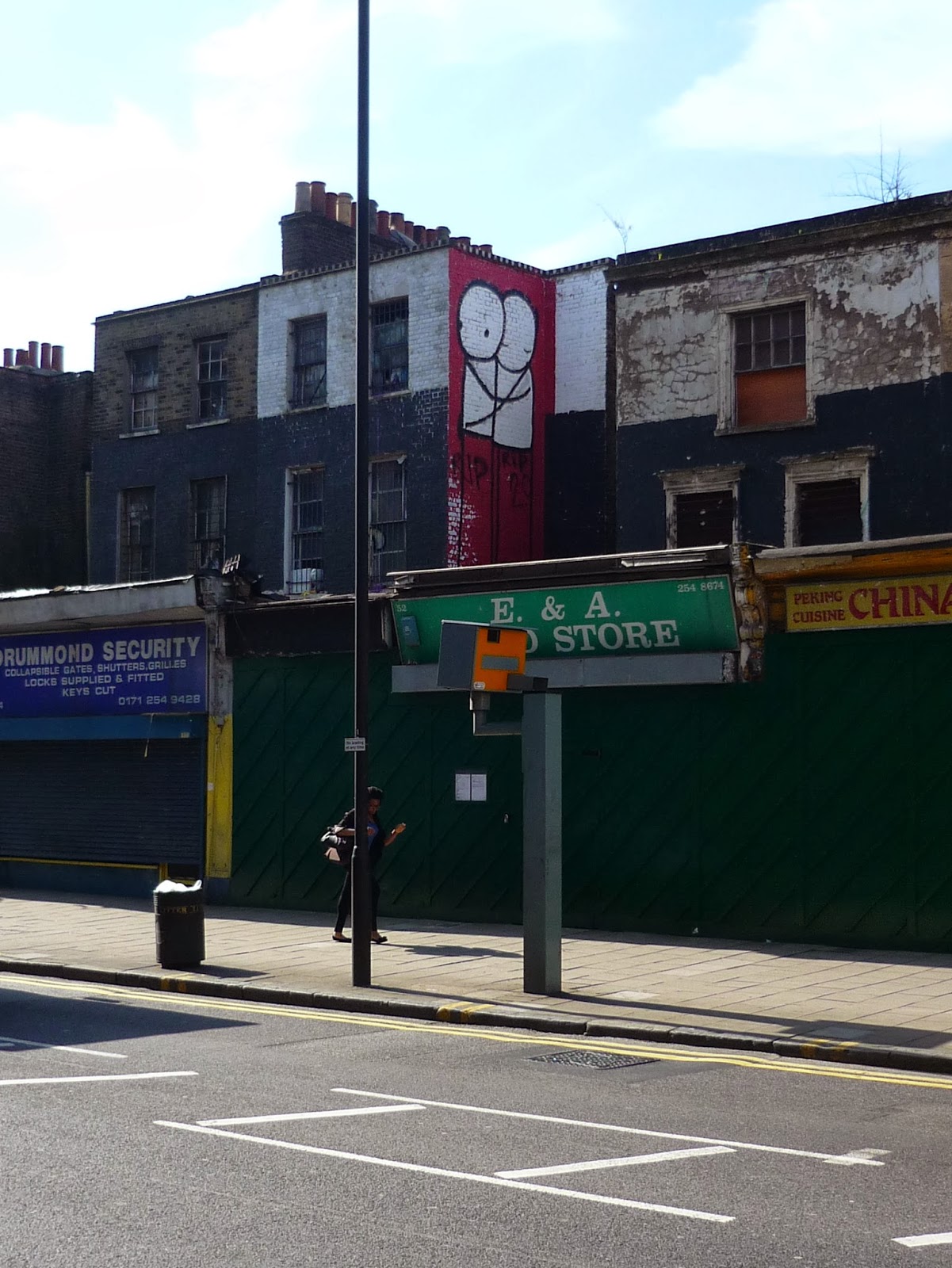 Murphy are to lease the new ground floor shops back to Hackney, which has specified 'open plan'  shops " designed to appeal to  range of potential occupiers". (Who are they? Ed.)   The degree of structural intervention to create such "open plan" shops, Alan Baxter LLP advised, would cause the buildings to collapse. In Hackney's eyes traditional shops - like those of  Broadway Market, Columbia Road and Covent Garden - have no place in Dalston Lane. No options appraisal appears to have been carried out - an oversight with grave consequences. 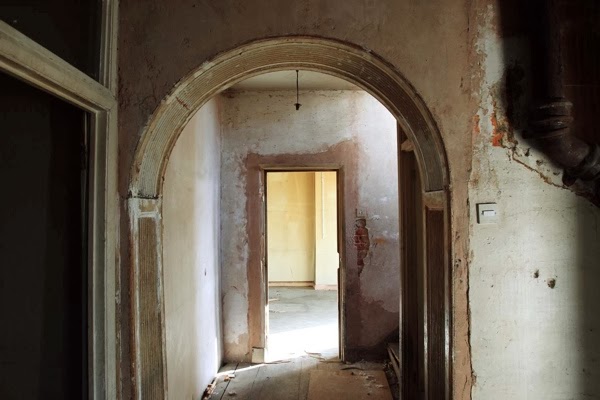 The ground floor interior of one of the 1807 houses that Murphy would rip out under the 'conservation led" scheme.

Even if we were to keep the traditional shops, Hackney responded, "the same conclusions would hold true"  because, Murphy's engineers say, the poor quality of Georgian construction and inferior bricks are inherently weak. 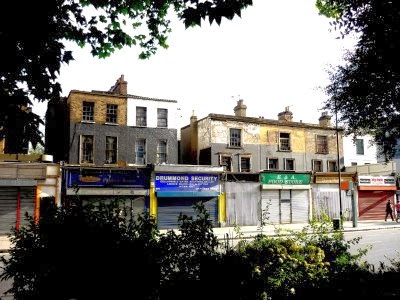 But Hackney's own expert, Alan Baxter LLP had  advised that "With regards to the brickwork strength argument, this is flawed. It is not appropriate to judge buildings of this age and type as if they are modern construction" . This view was supported by the forensic analysis of a SPAB Fellow, and the internationally recognised Morton Partnership whose opinion was that "some buildings...still have a very good potential to be retained in their entirety and brought back into use with sympathetic restoration and repair". The officers denigrated their views - "The position of the Ed Morton and Alan Baxter reports with regard to brickwork durability is not accepted." 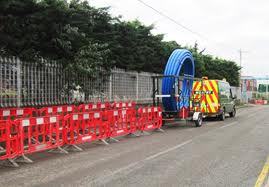 Murphy are know for "breathing life into infrastructure projects" but, sadly, not Georgian buildings.

When Murphy's structural engineer was asked whether he personally, or any member of his firm, had any conservation accreditation at all to support their judgment, he was unable to reply affirmatively and the Committee Chair stepped in to forbid further discussion of the issue. We are also  not aware that Murphy's architects had any such accreditation either. And so the houses must come down and be rebuilt with new bricks and modern construction techniques to create a replica "heritage likeness" scheme. 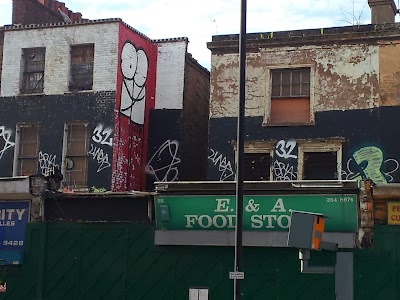 Although officers reported that the demolition and new build scheme will have "some construction cost savings", any affordable housing nevertheless remains "unviable" because, they advised, the developer must (as in all these schemes) first recover a 20% profit. Despite Committee members questioning, the officers failed to report and advise them that, if everything is demolished, the new build scheme could potentially attract a developer's windfall of 20% VAT exemption. The Council's manager had told OPEN members personally that he "argued strongly against any affordable housing to ensure the development would be of the highest quality."  Early written reports appear to show that they had ruled out any affordable housing even before any viability test had been undertaken. 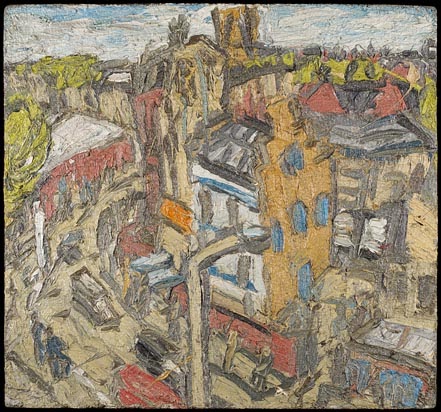 "Dalston Lane - Summer Day No1" by legendary Dalston painter Leon Kossoff, who features in Emma-Louise Williams' film "Under the Cranes" and on BBC by Iain Sinclair who referenced Hackney Council's vandalism

The Vandals: an eastern Germanic tribe which earned notoriety by sacking Rome in the 5th century, but which was later defeated by the Goths.
Vandalism: the gratuitous anti-social destruction of the environment and artistic creations.
Municipal vandalism: the destruction of our cultural heritage by corporate ignorance, deliberate neglect, greed and vanity, all in the name of regeneration and progress.
Posted by About OPEN Dalston at Friday, March 07, 2014