Transport for London (TfL), and its development partners Taylor Wimpey, have unveiled plans for a major private gated community in Dalston. Land with obvious potential for public green space in Dalston is to be entirely enclosed within the new development. TfL has informed OPEN Dalston that "the only viable opportunity for open green space will be that used by the residents and guests of the proposed scheme". In effect a private gated community which will have very little 'affordable' housing and no public open space whatsoever. 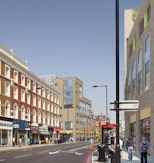 TfL/Taylor Wimpey's plan for the Western Curve's northern site at the junction of the High Street with Boleyn Road. The 8-storey scheme will enclose potential public open space for private use.

TfL's plans are part of its redevelopment schemes for the north and south sites of the Western Curve and follow the reinstatement of the railway tunnels for the East London Line extension from Dalston Junction north west to Highbury & Islington station.

TfL's statement also rejects the use of any of its other sites for open green space. 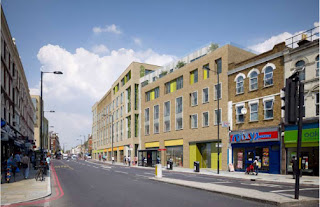 The open aspect and views from the High Street of the listed Reeves Printhouse building and Shiloh Church will be lost by TfL's plan for the southern site of the Western Curve where the possibility of some open green space there has also be rejected.

TfL, and its builders Taylor Wimpey, consulted the Council and some local Dalston businesses about its plans in the early summer. You can read about those plans here and a detailed critique of the schemes here. TfL were then to come back to discuss proposed amendments to the scheme but instead have simply published its plans, with minor amendments, for which it will soon apply for planning permission. 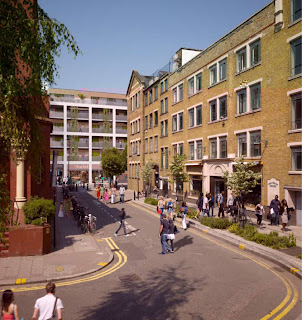 This is a view of TfL's proposed scheme enclosing Ashwin Street. In the foreground is Shiloh Church and the listed Reeves Printhouse building where Arcola Theatre, Bootstraps Roof Garden and Cafe Oto are based. The new development will enclose the space, block sunlight from the street and amplify sound. There will densely packed residents on the upper floors overlooking the street and ground floor shopfronts.

TfL plans do not comply with the guidelines in the Council's Dalston Area Action Plan (DAAP). In July the Government's Planning Inspector conducted a public examination of the Council's DAAP. TfL sent him a written submission that the guidance on building heights on the Western Curve sites, of between 4 - 6 storeys, was unduly restrictive. TfLs present plans include buildings of 8 storeys on the High Street.

You can read OPEN Dalston's written submissions to the Inspector here and here. OPEN Dalston, represented by solicitor Bill Parry-Davies, criticised the Council's DAAP for its failure to make provision for additional public space and increased bio-diversity in Dalston and for the loss of sunlight to public spaces, homes and businesses which will result from the DAAP's proposed building heights.

The missed opportunity for desperately needed affordable housing and open green space in Dalston comes when another proposed development threatens to compromise the intimacy and calm of Dalston only green sanctuary - the Eastern Curve Garden which is also one of Dalston's few secure play areas for our local young children. 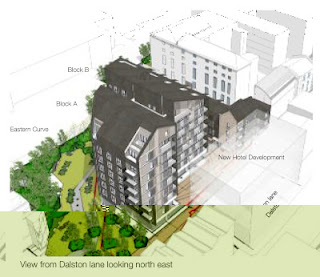 The Council's DAAP once proposed that the area of the Eastern Curve Garden should become the Dalston Park. Sadly, after public consultation closed, this was changed to designate it as a public thoroughfare and shopping mall.

We will report further if there are any changes to the schemes before the applications are made to the Council for planning permission. If you wish to help bring these schemes to the public's attention please email us at info@opendalston.net
Posted by About OPEN Dalston at Saturday, October 13, 2012 3 comments: