Objection to 2020/2206
Judith Watt of  Colvestone Crescent, E8 Submitted 18 October 2020
The proposed development on the land at the junction of Colvestone Crescent, Ridley Road and Birkbeck Road should not be granted planning permission on these grounds:
1. Impact on the Nursery School. It will put the outdoor classroom of the adjoining Nursery School into shadow for most of the school day for most of the school year thereby significantly impacting the health and well-being of generations of children aged 3-4 years old
2. Impact on the Conservation Area. It will destroy the view of the Grade II listed Primary School at the entrance to the St Mark’s Conservation Area
3. Impact on the market and surrounding area. It will notably impede the planned improvements for the whole Ridley Road market area being developed under LP33.
1 Impact on the Nursery School
1.1 Misinterpretation of BRE Guidelines The “playground” of the Colvestone Nursery is really an outdoor classroom that is used all day by the children, weather permitting. It has many activity areas, including a raised garden bed, designed for outdoor learning throughout the year.

Lumping this precious resource in with other open spaces, such as parks and playing fields, which are listed in 3.3.3 of the BRE guidance1 and quoted in this proposal, is inappropriate and does not take into account the needs of this particularly vulnerable part of the population: children under five in a deprived part of London. The Council should not accept the developer’s assertion at 4.4.1 of its Daylight and Sunlight Study that “the playground area at Colvestone Primary School meets the BRE recommendations”. The BRE makes clear at 1.6 that its advice “is not mandatory and the guide should not be seen as an instrument of planning policy” and that “although it gives numerical guidelines, these should be interpreted flexibly” and furthermore that “the calculations methods in Appendix G2 are entirely flexible” if the planning authority wishes to “use different target values”.
1 Site Layout Planning for Daylight and Sunlight, A Guide to Good Practice. Paul J Littlefair. Second Edition, 2011 2 Appendix G: Calculation of sun on the ground
In other words, the Council has the choice to protect the Nursery School from this overshadowing blight for this and future generations of children.
1.2 Misleading drawings The developer has submitted drawings showing red outlines of the previous application (2015/0448) superimposed over its proposed building. These red outlines give the highly misleading impression that this new proposal is significantly smaller in scale to the earlier one whereas the wall facing the Nursery School is only half a metre lower, according to the drawings submitted by both developers 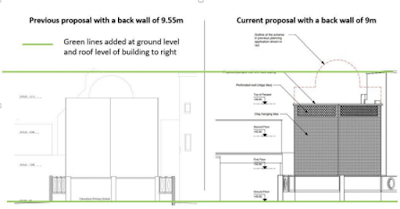 The drawings submitted for 2020/2206 are not the only misleading aspect of this proposal.
1.3 Misleading assertions The assertion in this proposal that the “size of the new building has also been established through the previous scheme which was granted planning” literally makes no sense. Yes, the previous scheme was granted planning permission, but this was quashed by the High Court, at significant cost to the Council and the community. While the judgment hinged on the false calculations of overshadowing submitted by the previous developer, the case demonstrated conclusively that the height of the proposed building, and the extent of the overshadowing it would have caused when correctly calculated, was at the root of the problem it posed. The judge made clear the issue of overshadowing was for him “the one of critical importance” and he agreed with the findings of the independent sunlight expert, commissioned by Strategic Property Services on behalf of The Hackney Learning Trust. The judge concluded “that very substantial parts of the playground are in shadow for substantial parts of the school day” and that “in December none of the area would be sunlit”. The developer makes a further assertion that “The principal of the provision of a building of this size on this site has been established in the pre-application advice.” The Council should publish this advice so that the basis for this claim can be understood.
1.4 Misleading calculations The developer’s calculations of the overshadowing need to be carefully scrutinised before any decision is arrived at by the Council. It appears that their sunlight expert has made at least one major error, and possibly several more important missteps in determining the extent of the overshadowing on the Nursery. Only when the developer is required to hand over the computer modelling for independent expert analysis will this become clear. The major error is likely to concern the extent to which they have factored in (or left out) the “perforated” wall section of the back wall. The Design and Access Statement states that “on the side facing the school the wall will rise up to 1.8m, above there will be a perforated wall made of roof tiles, eliminating any possibilities of overlooking to the playground, at the same time allow more sunlight to reach the playground of the school. As a result, the proposed design meets the recommendations as set out in the BRE Guide.”
As any school age student of Physics knows (and any qualified architect surely must know), light travels in a straight line. It is mendacious nonsense to suggest that light travelling through the perforated section of the back wall will bend to reach the children at ground level.
The developer’s pictures below show the wall as it will be seen from the Nursery end of the building; the terrace on the second floor with the perforated section above 1.8m; and a close-up of the ridge tiles making up the perforated section. 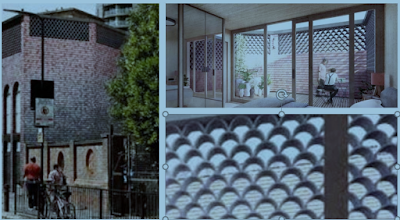 The High Court required the previous developer’s sunlight expert and the independent sunlight expert commissioned by the Council to go together to the school on 6 May 2016 to take and agree measurements to provide a baseline for the existing extent of overshadowing, and then to model the impact of the proposed building. The Council expert shared his modelling with the developer for checking but the developer refused to reciprocate.
The judge accepted the Council’s expert report and cites it in his judgment. The table below compares these findings with the figures provided by the current developer for the proportion of the playground surface that will receive at least two hours of sunlight on 21 March:
Council’s expert Current proposal Without building 82% 89% With building 57% 76% Percentage point / Percent reduction 25pp / 31% 13pp / 15% Ratio 0.69 0.85 What this shows is that the current proposal uses a higher baseline than was available by reading the Court judgment and then reports an implausibly low reduction in overshadowing for a building that is only around half a metre shorter. Given the huge waste of time and money in the High Court, the Council really must insist that this developer submits their modelling to independent scrutiny, preferably paid for by the developer.
2 Impact on the Conservation Area While the developer tries to make out how small the building is when it comes to overshadowing, they “big it up” when it comes to its impact as a potential “local landmark”. In reality, it would almost completely obscure the view of a genuine local landmark, the Grade II listed Primary School which currently marks the entrance to the St Mark’s Conservation Area. Indeed, the developer asserts that “The new building will serve as the new ‘gatehouse’ to the conservation area” and has “the potential to become a modest architectural gem.”
The Heritage Statement submitted by the developer notes (twice) that the “view of Colvestone Primary School from the corner of Ridley Road has also been identified as an important view within the conservation area.” But goes on to argue that “It would be too simplistic to suggest that … the view of the primary school should be preserved” and poses this question, “whether the architectural quality of this proposed building … would outweigh the change of view from Ridley Road” to which my answer is that it does not. 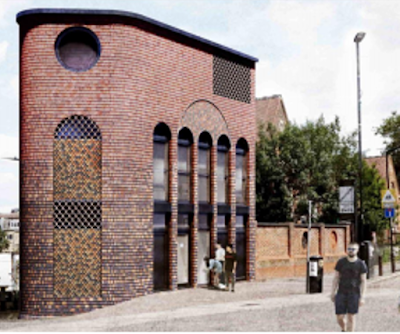 The currently open view of the school from the market has been enjoyed since the Second World War when the Birkbeck Literary and Scientific Institute that had stood on what is now the Nursery Playground fell into ruins after local bomb damage.
The school is the only one of the “Birkbeck Schools” still intact. These were established by William Ellis between 1848 and the early 1860s. Richard Clark, Research Fellow at Birkbeck College writes that the school’s “premises, which today remain nearly intact as Colvestone Primary School, reflect in their architecture some of the most progressive elements of Ellis’ philosophy” with “well-lit classrooms in place of dull monitorial halls”. If this development goes ahead and the building stands for as long as the Nursery has had the outdoor learning space, then the one or two people living in the flat will have blocked the light to well over a thousand 3-4 year-olds. How progressive is that?
3 Impact on improvements to Ridley Road market and surrounding area This proposal is for the wrong building in the wrong place. If built, it will prevent that pivotal piece of land, in relation to the school, the market and the surrounding area, from being used for much more suitable purposes.
The Council is finalising its new Local Plan (LP33) after extensive consultations with local residents, market traders, local businesses, and visitors to Dalston. This small patch of land has featured in many of the comments on what Dalston needs. As far as I can tell, not one comment was made in support of it being used for anything like a 30sqm commercial unit (when so many shops in the High Street are empty) with a two-storey dwelling for one or two people.
The Council has engaged urban design consultants to help develop plans for improving the market with the £1m+ budget under the Good Growth Fund and to develop ideas for Colvestone Crescent becoming Hackney’s first 21st century street. These consultants have made a point of showing the potential use of this site in their proposals back to the Council in March this year. 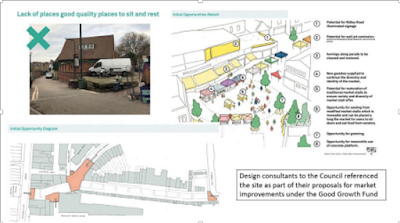