Hackney Co-Operative Developments, which owns and converted the 3-10 Bradbury Street terrace of houses to affordable commercial uses, and manages Gillett Square, has made a planning application to develop the terrace. All of its tenants  ( except the shops) will have to vacate elsewhere whilst the development takes place.

An artist's impression of the back of the Bradbury Street terrace overlooking Gillett Square, after the development

The plans include constructing an additional 4th storey along the terrace and extending the rear elevation of the terrace further into the Gillett Square and encasing it within polycarbonate plastic and steel cladding. You can access  the HCD planning drawings and reports using application number 2018/0792 here The public consultation officially closes on 7th May. If there are numerous objections the application will need to be decided by Hackney's Planning Committee  in due course and not just its Head of Planning. You can comment on the application here or by sending an email quoting reference 2018/0792 to  planning@hackney.gov.uk 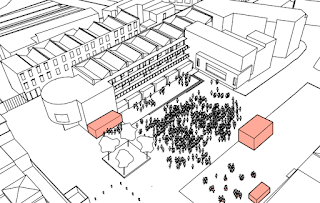 The proposal has attracted controversy.The  exterior walkways,  and award-winning "market-pods" which  provide affordable and start-up business space, will be removed despite having won widespread acclaim and which do so much to animate the square. The new exterior finish will be one more characteristic of a glossy corporate headquarters rather than affordable work spaces for local people. Hackney Co-Operative Developments (HCD) hope to build replacement pods on the other side of the square. 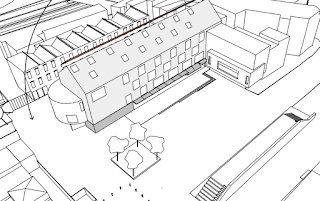 HCD has been revealed not to be the model landlord one might have expected. Very few of its tenants have security of tenure and will simply be evicted if they don't accept HCDs terms for vacating. Although the development will be part-funded by public money from the GLA, HCD has refused to publish its financial viability projections for this costly scheme which  produces relatively little new lettable space to justify the expense.  To pay for the scheme rent rises in the future look likely . A joint letter from interested parties last October, urging  HCD to adopt a more inclusive approach, was rejected.

HCDs historic terrace  is mirrored by a terrace of similar scale and period on the south side of  Bradbury Street. HCD's heritage consultants comment that "The view along Bradbury Street is deemed an important View within the [Dalston] Conservation Area....[the terrace]possess aesthetic value and make a positive contribution to the Conservation Area." 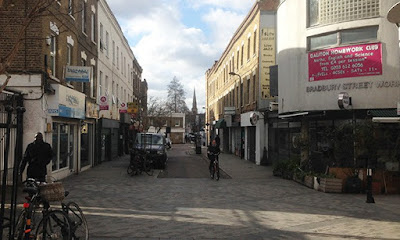 Bradbury Street looking west lined with the historic Victorian terraces. the terrace to be developed is on the north/right side of the picture

The Dalston Conservation Area Advisory Committee, which is composed of independent  local architects and heritage experts, has commented on HCD's scheme "The proposed building is too large and too high. The volume is overbearing on the Gillett Square side, but also detracts from the collection of buildings of Townscape Merit on Bradbury Street. The dominant pitched form of the roof extension is inappropriate in the predominantly Victorian context and would damage the quality and character of the conservation area."   Despite the damage which the scheme would cause to the heritage value of Bradbury Street, HCD's consultants (somehow) conclude that  the scheme will "will preserve and enhance Bradbury Street." 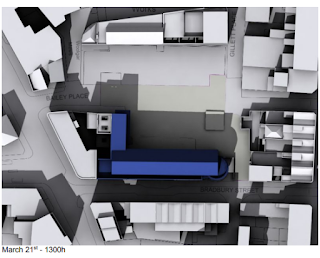 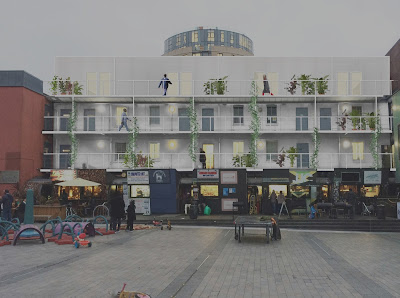 Here is  a more modest alternative proposal for increasing affordable workspace by creating a simple mansard roof along the terrace. Without the high pitched roof  which HCD proposes, a mansard  would not dominate either Bradbury Street or Gillett Square. Neither would it involve spending valuable funds enclosing the building in plastic to create "break out spaces" which generate no additional rental income to pay for the scheme. This alternative  would also leave the  outdoor "market pods" in place, and the open walkways which add to the square's vitality. The alternative scheme would still generate sufficient income, from the new 4th story workspaces, to enable all the terraces facilities to be upgraded to contemporary standards. So what's wrong with that? HCD hasn't yet adequately explained its reasons for rejecting this alternative option.

You can access  the HCD planning drawings and reports using application number 2018/0792 here. The public consultation officially closes on 7th May. If there are numerous objections, and numbers do count, the application will need to be considered by Hackney's Planning Committee in due course You can comment on the application here or by sending an email quoting reference 2018/0792 to  planning@hackney.gov.uk

Celebrating Dalston's 150 years of association with the arts

2018 is the 150th anniversary of Dalston's association with the arts. Here's a new 10 minute film which tells the story of our architectural and cultural heritage from 1868 to 2018 and the risks which it is now facing.


There's a call going out to all those who want to contribute to the celebrations of this anniversary - all contributions will be welcomed. Get in touch through DalstonArts150 via twitter, instagram or facebook

There's everything to celebrate, to protect and to conserve for future generations!
Posted by About OPEN Dalston at Thursday, April 26, 2018 No comments: