On Hallowe'en Dalston was dead...but not buried. 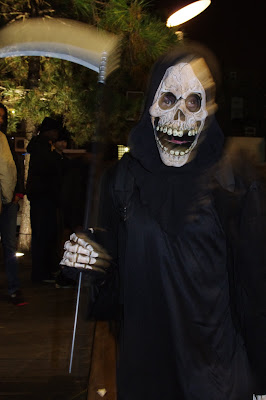 The living dead with strangefolk, ghouls, ghosts and witches 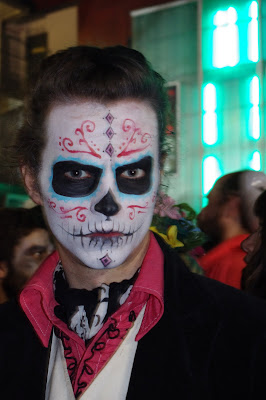 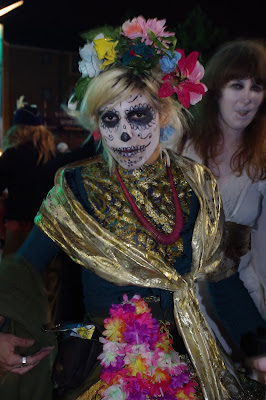 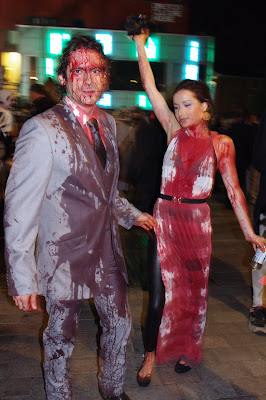 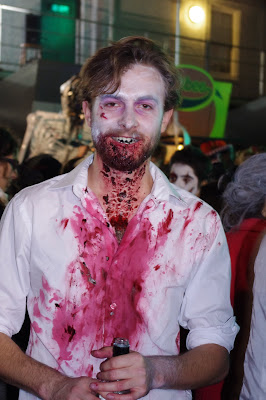 from Hoxton Square to Dalston 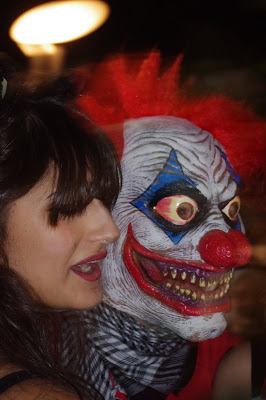 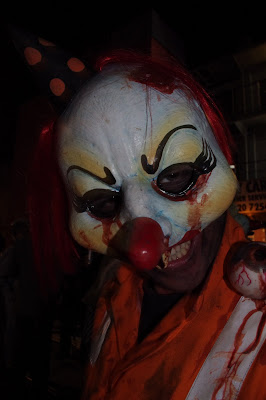 to celebrate Hallowe'en in Gillett Square 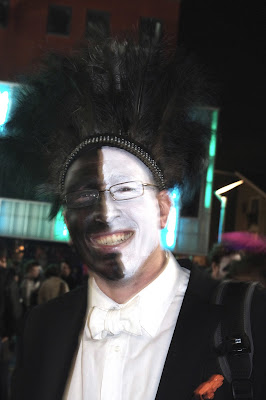 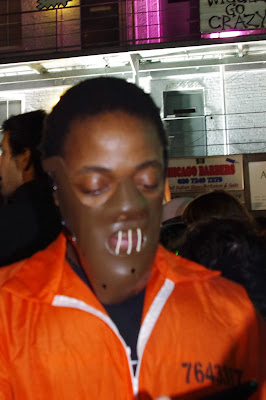 and as dawn threatened their reverie 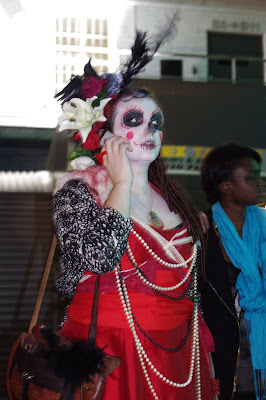 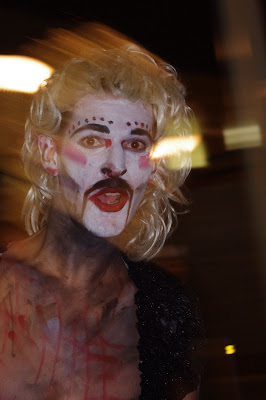 they fled away to continue the celebrations 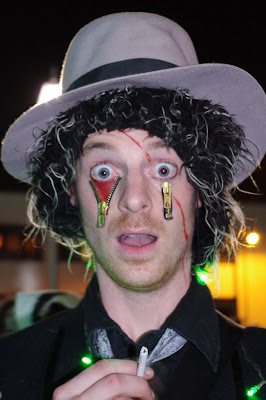 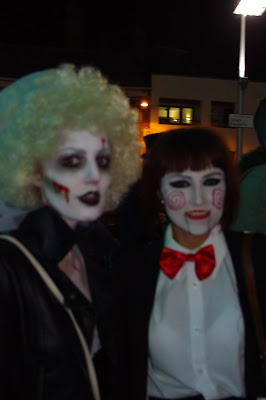 with more dancing and feasting in Passing Clouds 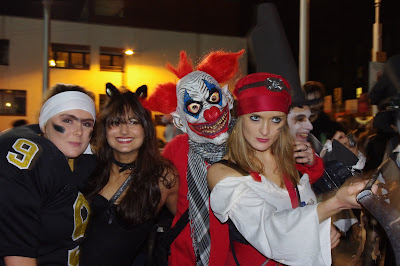 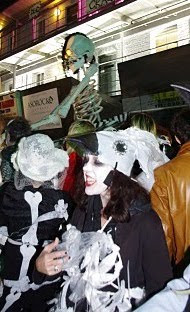 "Houses good. Flats bad" says Barratt (but it's too late for Dalston).

Barratt's Chief Executive Mark Clare is on a charm offensive 'We are trying to build what our customers want rather than what we thought they wanted or what the planners wanted’ explains Clare. But his comments are not purely altruistic. ‘We are also moving away from flats as fast as we can because people can’t get mortgages on them’ he adds. 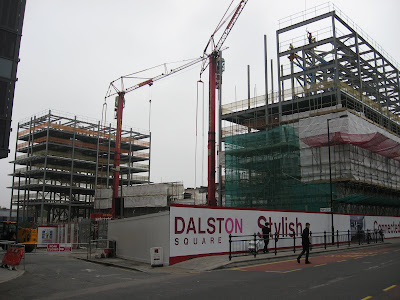 Despite the thousands of overcrowded families on Hackney's waiting list it's a once in a lifetime missed opportunity for Dalston as Barratt lashes up another 9 blocks of 330 private flats for sale at Dalston Square. 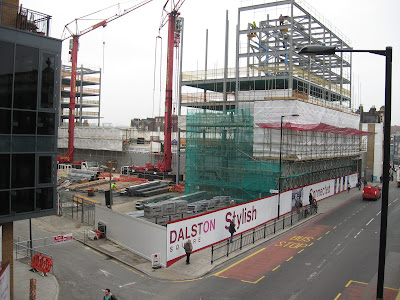 Although Barratt predicts a double-dip in house prices there's no sign of it in Dalston - East London house prices have been surfing the Olympic 2012 wave. Barratt, laden with debt, needs to keep prices high and has been drip feeding supply and continuing its overseas marketing to target cash rich buy-to-let investors. As we have reported previously two thirds of homes built in London last year were reportedly sold to buy-to-let purchasers.

The government's latest spending cuts slash subsidy for affordable housing, and housing benefit, so local people now have even less chance of buying or renting an affordable home. But is Barratt's Mark Clare bovvered? He's had a £568,000 bonus this year and he's won the £1billion deal to rebuild Basildon. 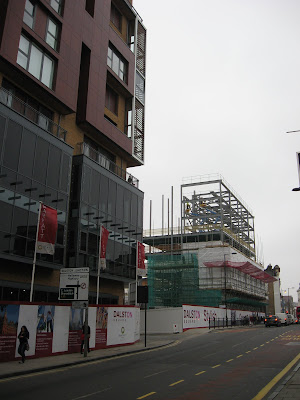 The crash in land values has reportedly seen housebuilders stocking up on development sites at bargain prices - but still they argue against building affordable homes. One authority, Wakefield Council, has sucessfully fought for its 30% affordable housing targets in one new Barratt development.

But in Dalston, Hackney and the GLA rolled over. They say that, because of the eyewatering sums of public money they have already spent 0n the £63million Slab, they've waived the rules. Despite their policy targets of 50% affordable homes, no affordable housing can be built on The Slab at all. So when Hackney's Mayor Pipe calls The Slab "a useful bit of development land" one has to ask "Useful to whom?"

Posted by About OPEN Dalston at Friday, October 22, 2010 No comments:

Boris! It's a deluge of drivel.

The outcome of Boris' investigation into the scandalous £63million cost of The Slab, on which Dalston's bus/rail Transport Interchange has been built, has revealed nothing to the public about the actual cost of the Slab or how the cost ran out of control. 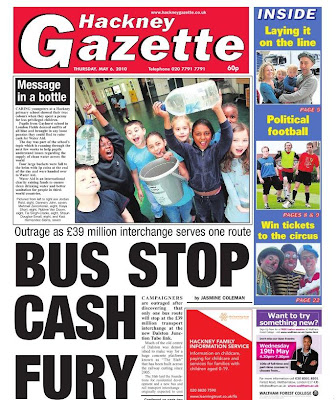 Boris Johnson had agreed, at the GLA Mayor's Question Time, to investigate the cost of The Slab in Dalston.

But instead of commenting on the cost, and knowing of the public's disgust at the wanton destruction of historic Dalston to pay for The Slab, Boris' Answer asserts "The only building to be demolished to make way for the scheme was the snooker hall on Kingsland Road".

So what happened to the old 1865 station? 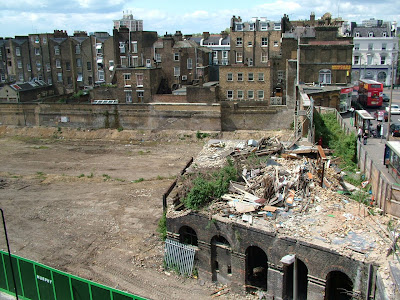 And what happened to 2 Dalston Lane next to the old station? 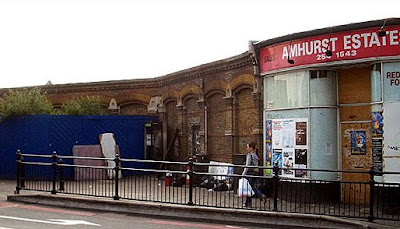 And what happened to the cottages in Rosebery Place on the railway embankment? 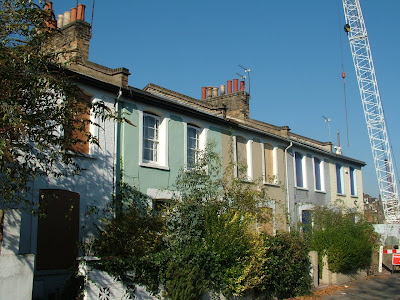 And what happened to our locally listed Georgian houses on Hackney's site next door? 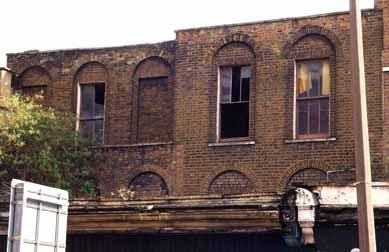 And what happened to Dalston Theatre? 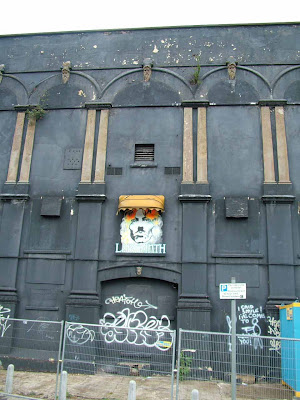 And what happened to the oldest circus entrance in the country which became home to the legendary Four Aces Club? 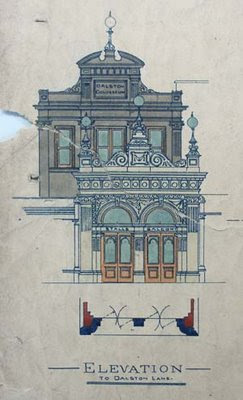 All these historic buildings were in fact demolished by the authorities to maximise the development potential of their sites to help fund the cost of The Slab. 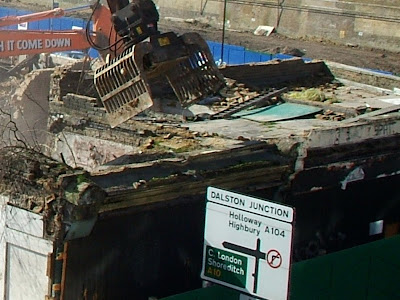 So when Boris says "The only building to be demolished to make way for the scheme was the snooker hall on Kingsland Road" it appears that he has been seriously misled. It's a deluge of drivel.

Not that the making of misleading statements by the authorities is anything new.

Right from the start TfL told OPEN, in writing, that "regarding the Hackney site there is little heritage effect from our proposals". But a few months later it was revealed that demolition of Dalston's heritage buildings and redevelopment of their site was part of the authorities' deal to pay for the The Slab. They called it "cross subsidy" - Hackney sold the site for a peppercorn and will rent back the library from Barratt.

And when OPEN obtained injunctions to stop the demolitions, for the alternative scheme to be considered, Hackney's solicitor wrote to tell us that the demolitions were a requirement of TfL. The LDA was to pay the demolition costs. Both are agencies of the GLA. The LDA even wrote to the Court to say that unless Dalston Theatre and the Georgian houses were demolished The Slab scheme would be financially unviable and would collapse.

And, throughout the time, the authorities told us that New Dalston's Transport Interchange on The Slab would be used by 80 buses an hour. But now, when it is revealed that only one bus route may in fact use it, we are told that the demolition of old Dalston and the £63million cost of The Slab was a necessary investment in future (unspecified) transport needs.

So it's more tall storeys from the GLA - another nine blocks of private flats for sale are being built on The Slab using public subsidy and with no affordable housing at all. 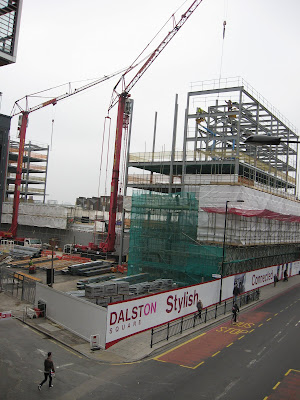 So if Boris can say "The only building to be demolished to make way for the scheme was the snooker hall on Kingsland Road" would it be surprising if members of the public don't believe anything the authorities tell us in the future?

The site of Hackney's Dalston Theatre and locally listed Georgian houses which were demolished to make way for The Slab Transport Interchange scheme
The Vandals: an eastern Germanic tribe which earned notoriety by sacking Rome in the 5th century but which was defeated by the Goths.
Vandalism: the gratuitous anti-social destruction of the environment and artistic creations.
Municipal vandalism: the destruction of our cultural heritage by corporate ignorance, deliberate neglect, vanity and greed all in the name of progress.
Posted by About OPEN Dalston at Tuesday, October 12, 2010 1 comment: