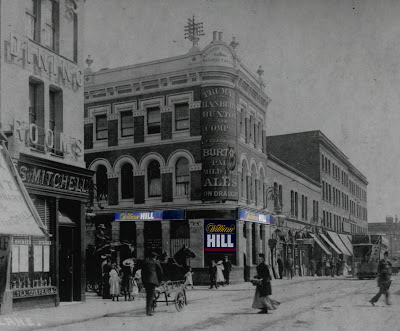 The old Railway Tavern at 13 Dalston Lane, in about 1910, which now is our local bookies

On Wednesday 3rd July Hackney's Planning Committee will consider TfL's application to build 106 flats and shops on Dalston's 'Western Curve'. Will the Committee agree with Hackney officers' recommendations or with the objectors?

-  "reduces its mass at sensitive locations to create a more responsive and sculpted form" and causes "no substantial harm to heritage significance"
OR
- the designs are bland, undistinguished and will dominate the High Street and its historic buildings. 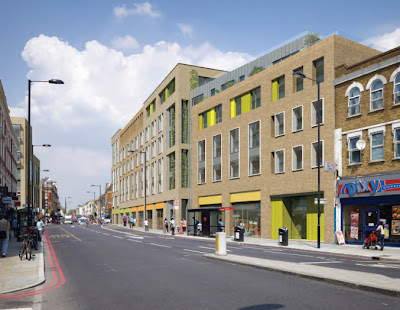 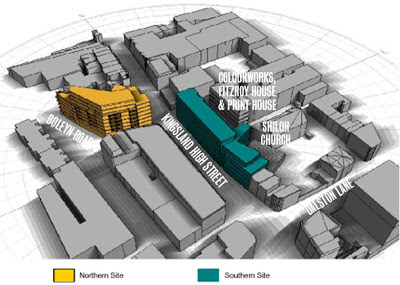 Dalston Peace Mural to be privatised

Hackney has been advised to sell Dalston's Peace Mural building on a 15 year lease to a private developer who is converting 17-19 Dalston Lane next door into a bar and restaurant, a report to Hackney Council's Cabinet reveals.

The Railway Tavern, and the Peace Mural at 15 Dalston Lane, which Hackney bought in 2010

The report states that "the building as a whole is in a very poor state structurally and this will, if not repaired, eventually necessitate demolition. A lease to a commercial operator will enable the Council to repair the building and secure the future of the mural at no cost to the public purse and provide an income.". The Council report acknowledges that there has been no consultation on the proposal to dispose of it.

The Dalston Peace Mural is an iconic cultural landmark and part of a building which Hackney has allowed to become derelict.The structural repairs may include rebuilding the front and rear walls, during which the side wall with the mural could be potentially vunerable and in a precarious state.


It seems extraordinary that, without consultation or marketing, Hackney should agree to sell it to a new venture with no apparent trading history, which is associated with Antic Ltd. which recently collapsed reportedly owing £2.6million, which has twice been refused planning permission to develop  the neighbouring site, and which has no known record of building conservation.