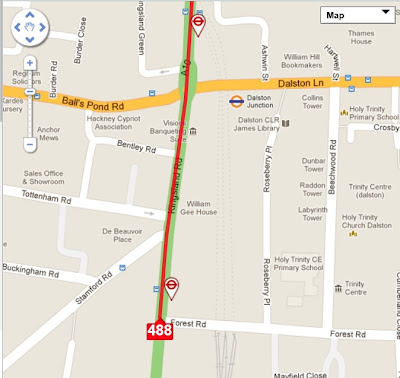 The 488 from Bow to Dalston Junction terminates at the bus stop "D" in Kingsland Road, near Forest Road (see TfL 488 bus map).  Passengers must alight there and then walk back along Kingsland Road, and up the steep ramp, to get to the Overground station.  Anyone mobility impaired such as myself, a wheelchair user, or someone with a heavy suitcase, etc, (or a non-disabled person in icy weather) will have great difficulty climbing this steep ramp so access to the station (for me) has to be via the entrance in Dalston Lane (which is quite some distance to trek from bus stop "D" ). 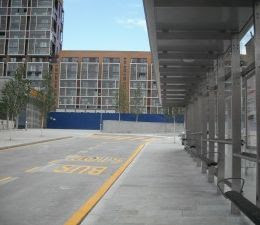 The ramp where the 488 buses to Bow emerge from The Slab and pick up passengers. The 'step free access' to the rear entrance of Dalston Junction station is to the left at the top of the ramp.

On one occasion I persuaded a 488 bus driver to drop me off at the drivers'  Rest Stop on the actual Slab. However, the idiots who designed and built the bus station didn't bother installing a dropped kerb there and, as I approached the station entrance from the Rest Stop, I discovered the footway gets progressively narrower and narrower until ... it gets too narrow for the wheelchair at all and I just tipped over and fell off the high kerb into the road! 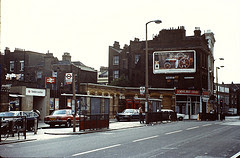 
Bus stops at transport interchanges should contain facilities similar to the ones we enjoyed at the old Dalston Junction bus stops (in Dalston Lane) in the mid-1980s, namely; distinctly separate but adjacent stops dedicated to different routes e.g. West-bound [30, 38, 56, 277] or South-bound [242], shelters, seating, timetables, wide pavements, public telephone boxes, litter bins, access to alternative transport such as taxi ranks nearby. Oh, they should contain that recent addition, which didn't exist in the 1980s, the Countdown signs - although there were always plenty of friendly bus inspectors around to tell you when the next bus was due! " 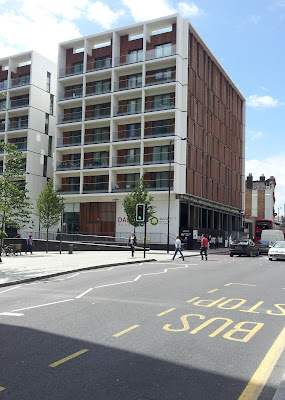 Todays entrance to the Dalston Junction station - narrow pavements and not even a bus shelter for rainy days. (A set down and taxi-rank lane was originally planned by TfL but the Dalston Square buildings had eventually to be built forward right onto Dalston Lane to counteract the accelerated wind speeds which are created by tower blocks - Ed.) 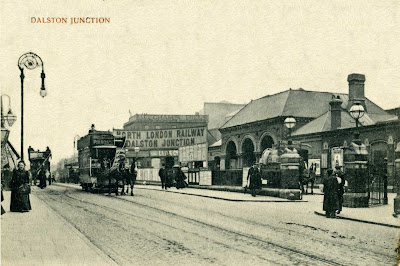 Dalston Junction station entrance in about 1897