Judge rules that he can't save Dalston Georgian houses from demolition. OPEN is considering whether to appeal.

A High Court Judge has ruled, on OPEN's judicial review, that he cannot overturn the planning permission granted by Hackney to demolish all of our sixteen Georgian houses in Dalston Terrace. Hackney's Planning Committee granted the permission to Murphy last March and OPEN has disputed the decision ever since. 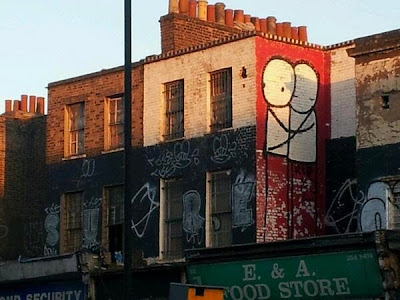 The Honourable Mr Justice Collin's decision last Monday means that, unless OPEN can urgently obtain permission from the Court of Appeal to continue its challenge, demolition could start before Christmas. 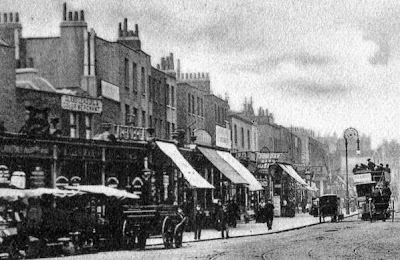 The story of Dalston Terrace is a grubby chapter in Hackney's history. Once described as "remarkable survivors of Georgian architecture" by English Heritage, many of the 200 year old houses have been reduced to perilous ruins since Hackney first acquired them in 1984. This sorry tale reminds one of the Council's earlier dealings with the 1886 Dalston circus buildings, and the charming old houses of Ashwin Street,  all of which the Council needlessly destroyed. 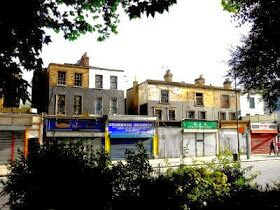 The Council appears to place little value on its own policies, Dalston's architectural heritage, the views of our local community or of national and local amenity societies and independent experts. The Hackney/Murphy scheme also fail to meet the needs of local people and small independent businesses for affordable homes and workplaces. 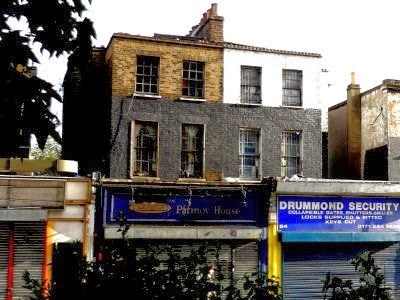 When first objecting to the Hackney/Murphy scheme, OPEN stated to the Planning Committee that the damage already done to Dalston Terrace was bad enough, and that its loss by total demolition would be unforgivable. The total loss of Dalston Terrace is now a very real possibility. 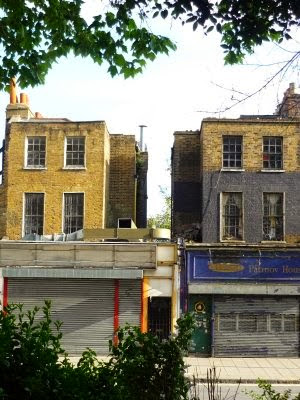 There will be further expense in pursuing the judicial review on appeal. We urge everyone to keep donating to the fight so that the prospects of succeeding on appeal can be urgently considered.

You can also help by buying a limited edition "Save Dalston Lane" comfy organic cotton T-shirt or a Tote bag. Buy them here  (Ahhah - my Christmas presents problem is finally solved! Ed) 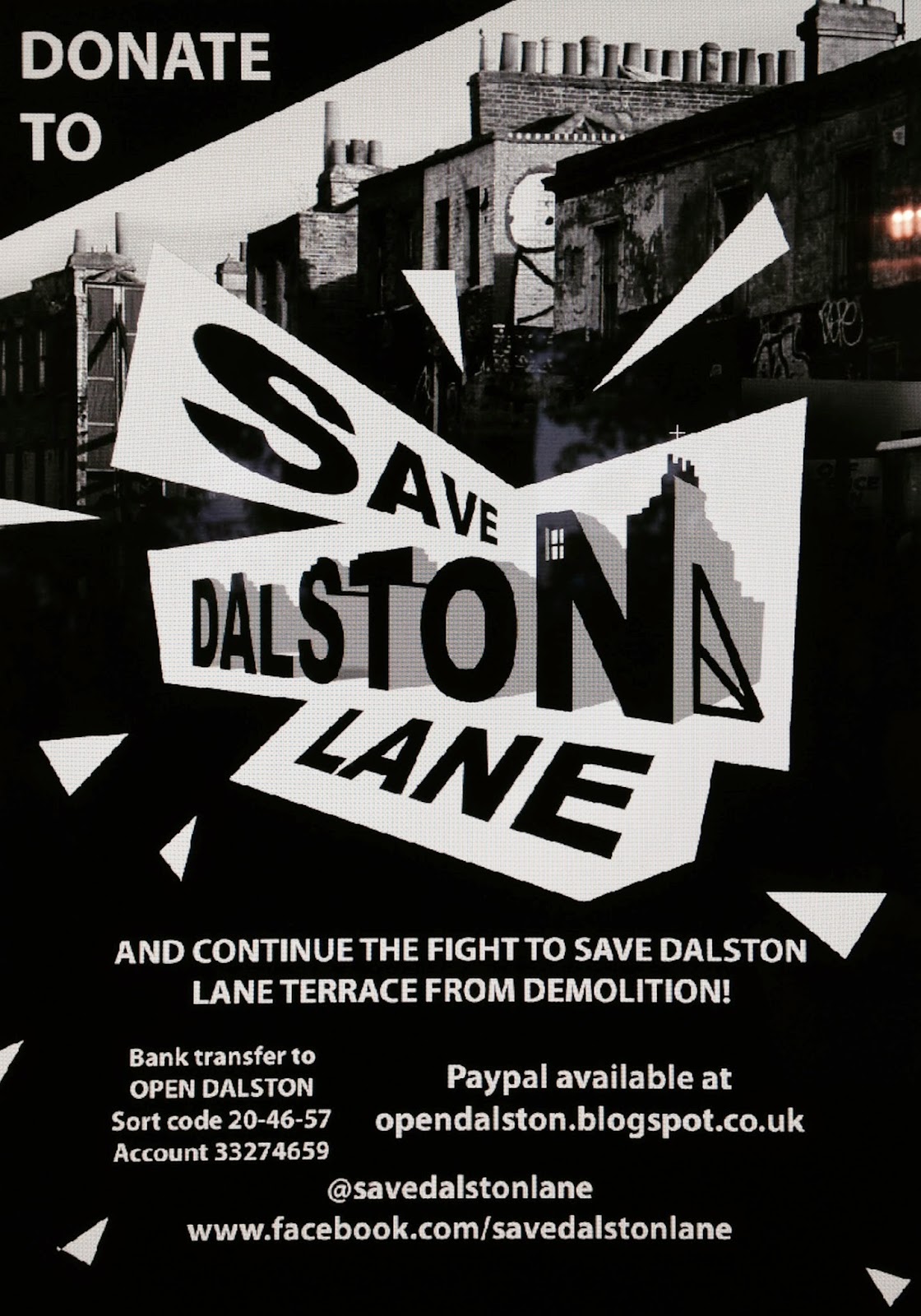 Background to the Judge's decision

The history of Hackney's dealings with Dalston Terrace is scandalous. Whilst claiming to be champions of our heritage, and adopting clear conservation policies for their restoration, the Council did nothing to maintain or protect the houses throughout its' period of ownership. Several £100,000s were lost in rents over the years as the houses were left empty, and most were allowed to become derelict. JON's Scooters and Pizzey's Flowers shop were also left unsupported after an arson attack and were later demolished by the Council. 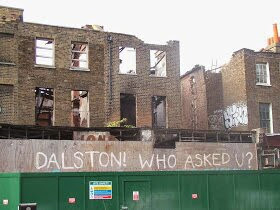 The Council had refused to sell the houses to its tenants, or to market them individually, on conditions for refurbishment. A conservation-led scheme, designed by Heritage of London Trust and funded by English Heritage, was prepared in 2009 but this was ignored by Hackney as "not relevant" to the current 'regeneration' plans. 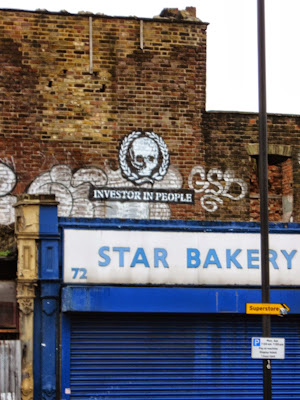 In 2012 Hackney decided to exploit the development potential of the site by a design which would load the fragile houses with 44 new flats, all for private sale, and  demolish ground floor walls to create open plan shops. Its' primary aim was to maximise the price Hackney could get on sale to a private developer rather than to conserve the houses.
It is a MIMBY scheme ( 'Mammon's In My Back Yard' Ed.) 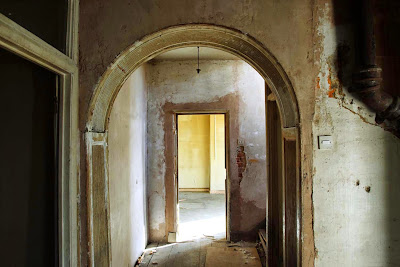 Inevitably the ancient structures would be put severely at risk by the profit-led scheme, but Council officers nevertheless recommended that the scheme was viable and "conservation led", so Hackney granted itself planning permission. Hackney had advice at the time from structural engineers but , when later employed by Hackney's development partner Murphy, the same engineers advised that on closer examination the poor build quality of the houses and years of neglect meant that even the facades could not be retained in any new scheme. 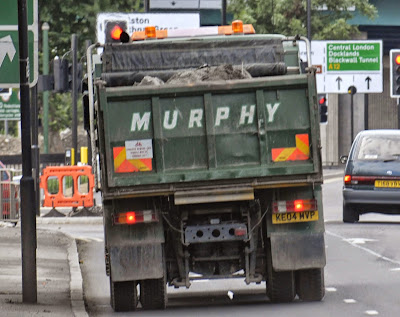 Hackney advertised its scheme for buyers, in the European Journal. It weighed the two offers received with an emphasis on price (55%) over quality (45%), and accepted Murphy's offer of £2.3m. Where else can you buy a site to build 44 new flats in Dalston for £2.3m? And, now that there will be total demolition and new build, an independent expert has calculated that Murphy could make over 30% profit on the development. Yet, despite this, Hackney still considers that it is "not viable" for Murphy to provide any affordable housing. 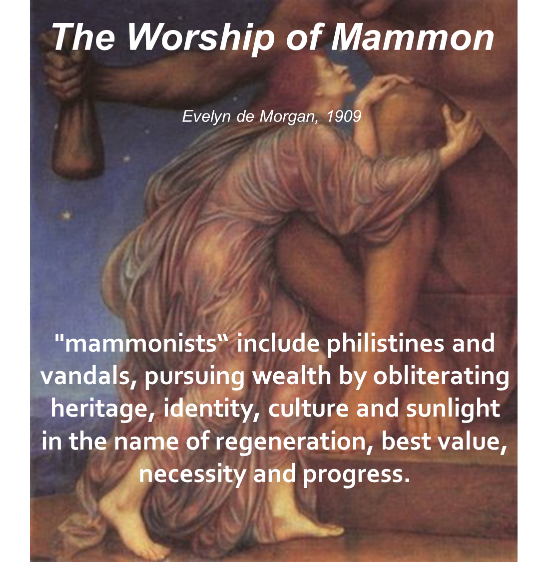 Hackney has refused to reveal the terms of its' development agreement with Murphy. After signing the development agreement in June 2103 Hackney authorised Murphy to commence demolition unlawfully last December, without planning permission.  It was only the community's outcry, seeing bulldozers on site, that stopped the illegal action. Hackney then shamefacedly had to admit that it had failed to publicise the demolition plans on its website ( due to "adminstrative error"). Next, the report of Hackney's independent consultant, Alan Baxter, which advised that some of the houses could be saved, was not published either. Neither was its existence revealed to OPEN, or to the Hackney Society, at  later meetings with the Council. The report only came to light when Murphy included it with its planning application papers to demolish the houses. How Murphy obtained it is not known to us. 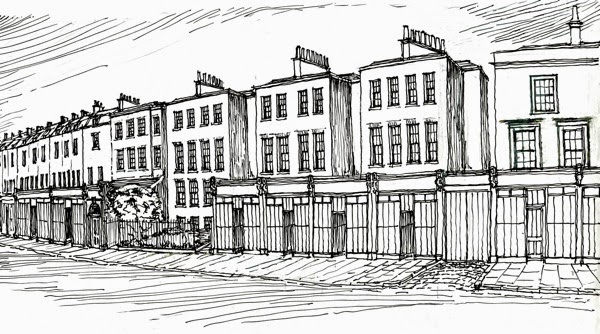 Spitalfields Trust's Tim Whittaker has sketched  how the Georgian terrace could be faithfully restored and have affordable housing (See Spitalfields Life ) (This scheme could be a PR triumph for Hackney! Ed).

Hackney officers and its Mayor have refused to meet the Spitalfields Trust to discuss whether its alternative scheme, for restoration and for 22 affordable flats, might be possible.  Instead the Mayor is reported to have had a private meeting with Murphy to hear their pleas that the approved scheme can not be built and to seek his agreement for total demolition and replacement with phoney replicas. 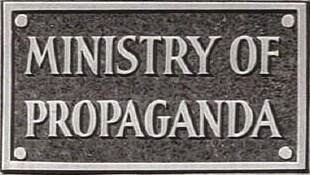 All this subterfuge is by a Council destroying publicly owned heritage assets whilst claiming to protect them, claiming to be transparent whilst concealing expert's reports and claiming to consult the public whilst disregarding what they say.

The Judge who dismissed OPENs judicial review was aware that Hackney's own independent engineer, Alan Baxter Associates, believed that the older 1807 houses could be repaired, and that the eminent Morton Partnership had reported that most of the houses could be saved. The Judge was also aware that there were hundreds of objections, including all the main national amenity societies. He was aware that the Planning Committee's votes were divided equally, and that the Chair used his casting vote in favour of the Council officers' recommendation that Murphy be permitted to demolish everything.

The Judge made clear from the outset of the Court hearing last Monday that he had no jurisdiction to substitute his personal views for those of the Planning Committee. Regrettably the Judge was not persuaded that there was any procedural or other legal error which could justify him overturning the planning permission.

OPEN is now appealing for funds to commission an expert to examine the Judge's reasoning and asses whether his decision can be successfully appealed. Any application to appeal must be made to the Court by 15 December.

Posted by About OPEN Dalston at Saturday, November 29, 2014