You still have time to comment about a developer's application for planning permission to build an 18-storey, 50 metre high towerblock of private flats next to Dalston Kingsland station. 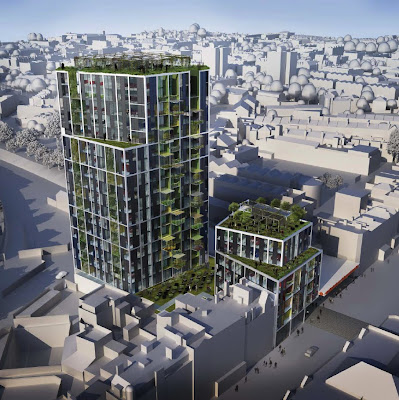 Is it a beacon, a landmark building, adding to Dalston's identity and character?
The 50 metre high tower will dominate and cast shadows across the Kingsland area. Like a lighthouse in reverse, it will steal the sunlight from public space, homes, businesses, locally listed buildings and Ridley Road market. The tower will cause higher wind speeds locally so that some public areas around the building will become "unsuitable for standing" (sometimes, the consultants say, "the criteria for safety of all pedestrians including sensitive pedestrians and cyclists is exceeded"). 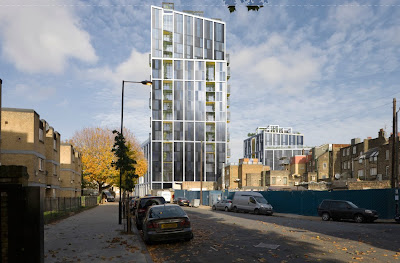 Will it meet housing need locally?
There will be 130 flats for sale but only 17 flats (13%) are to be "affordable". Policy guidelines are for 50% affordable housing. The "exemplary" design is so poor that 30% of flats don't meet the official minimum sizes. The remaining private flats (87% unaffordable) are in the exclusive "Dressed in Green" tower, with its a own secure entrance. The penthouse duplex apartments there will each cost around £1,000,000 (£1 million). 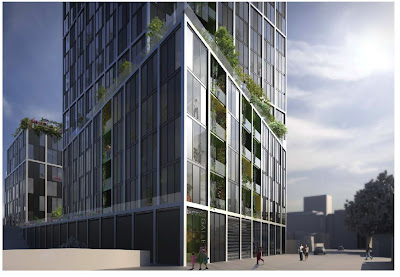 Is it environmentally sustainable?
The build quality does not reach the Code 5 standard for sustainable homes. Although the building is 'dressed in green' there is no explanation of who will undertake the necessary maintenance of the planting, or the urban agriculture proposed, or pay for it. No vegetation is sustainable on the bleak North Face of the tower. Is it green - or is it greenwash? 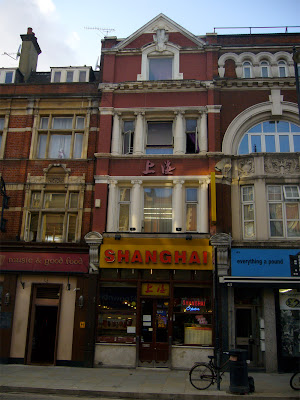 Does it respect its neighbours?
This 1902 Grade II Listed building, Cooke's old Pie and Eels shop, is next to the development site. It is one of an exquisite group of buildings with diverse architecture and fine detailing. The tower will overlook four conservation areas. The listed buildings directly affected also include the Rio Cinema, Colvestone Primary School and locally listed buildings opposite at 74-76 Kingsland High Street. Does the development acknowledge and respect its context....at all? 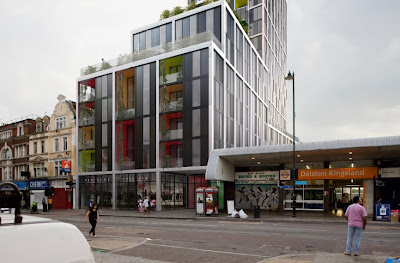 Is it gross exploitation of Dalston - a developer's try on?
The 2012 Dressed in Green development is six to eight storeys on the high street, eighteen storeys behind. Densities well exceed the London Plan guidelines. It dominates the 3/4 storey high street. It diminishes it's neighbours. It extracts huge development value from the site - but at the expense of the surrounding area. 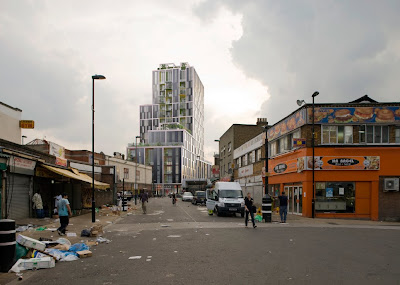 Where is the public benefit to justify this over-development of the site?
The developer expects to net a profit of over £10,000,000 (£10 million). What will Dalston get back for all it will lose? About £500,000 - which is about 1% of the development's resale value. The developer will give the money to Transport for London and Hackney Council to spend.

What some of the locals say (from EastLondonLines.co.uk)

You can see details of the application 2011/3439 on the Council's web site here.

It's not too late to make your views known to the Council. Send them in an email to planningconsultation@hackney.gov.uk and put "Planning Application 2011/3439 : 51- 57 Kingsland High Street" in the Subject line

The "Dressed in Green" tower is being promoted by the developer's PR company, Four Communications, which has recruited Hackney's Deputy Mayor Karen Alcock and Councillor Alan Laing (formerly a member of Barratt's PR firm Hard Hat). "We are keen to use Alan’s extensive network of contacts within London politics" "said Councillor Laing's new Managing Director whose company is also promoting the new Sainsburys planned for Stoke Newington and the controversial Stamford Hill school development.

Posted by About OPEN Dalston at Saturday, January 28, 2012