Budget bail out for Barratt

George Osborne's budget has provided a boost to property developers who have been struggling to sell because banks have been demanding 25% deposits from homebuyers since the 2008 credit freeze. Under the budgets new FirstBuy scheme first time buyers can pay just 5% deposit and the government, in partnership with developers, lend them the remaining 20%. The FirstBuy scheme is similar to the HomeBuy Direct scheme offered a year ago when Dalston Square Phase 1 was being marketed. 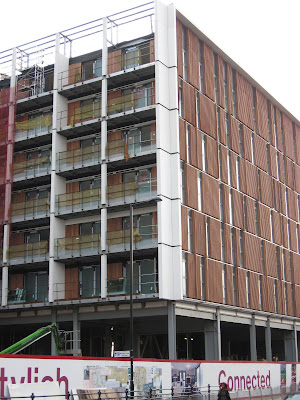 This photo is of Dalston Square Phase 2 - the wraps and scaffolding came off the Dalston Lane end this week
Dalston Square developer, Barratt's Chief Executive Mark Clare, described the Chancellor's budget as "exactly the tonic the housing market needed" . No doubt Barratt's shareholders agreed with him when they saw their share values surge as news of the public subsidy leaked out. 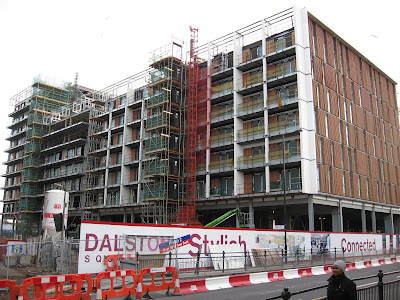 The budget also offers Buy to Let landlords a saving on stamp duty if they buy in bulk - so Barratt's Far East marketing of Dalston Square will get a boost from that too. 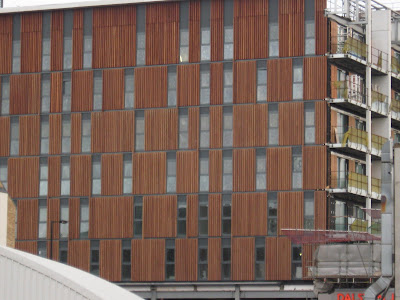 A broker, from market analysts Liberum Capital, said it should be helpful. "This is probably not the best way to help the housing market, but it does help to protect jobs among the housebuilders". Yes....and bonuses. Mark Clare earned £5680,000 bonus last year but thousands of Barratt's construction workers were laid off during the credit crunch.
Why the government is offering further public subsidy to property developers and private buyers is a mystery - despite massive public subsidy there is to be no social housing in Dalston Square Phase 2 which is all for private sale.
And we are seeing property developers queuing up to cash in on the budget's "buy now pay later" scheme for disposal of "surplus" publically owned land. 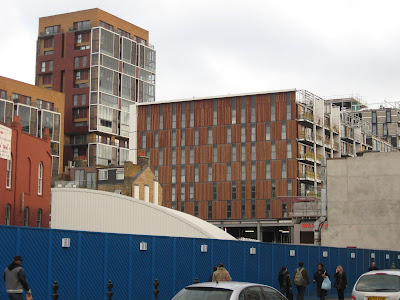 Dalston Square Phase 1 on the left and Phase 2, on the Slab above the station, on the right.

Other concessions to property developers offered in the budget include "streamlining" the planning system. How will this sit with the government's " localism" agenda which it says will give local people more say in the way our environments are developed? We continue to see open and green space, and historic architecture, redeveloped despite local people's campaigns against the loss of bio-diversity and local character. Here's one example and here's another and there are more battles are in the pipeline.
Posted by About OPEN Dalston at Monday, March 28, 2011