You can listen here to the February Hackney Podcast where Jeanette Arnold, London Assembly Labour Member representing North East London, is interviewed. She comments on the Dalston Square development. Referring to the developer Barratt's credit-crunch difficulties she states: "what we can't dismiss... is we may have to have new partners..." . 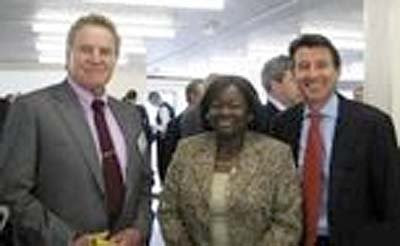 This week Barratt announced a loss of £590million. "(If you follow this link, change the Period analysis from 5 days to 5 years to see the full scary picture). "This remains an intensely difficult market with little forward visibility" said their Chief Executive Mark Clare. "A capital injection could have pulled Barratt back from the brink..We must now limp on.." said KBC Peel Hunt. A further report suggests imaginative costs cutting is being praticsed on Barratt sites.

At a recent meeting between OPEN and the authorities, organised by OPEN's Patron Lord Low, it was said simply that Barratt is contracted to deliver the development. There is no Plan B. There has already been massive public subsidy of this loss making scheme. The authorities denied receiving any indication from Barratt that further public subsidy is needed. But they added that, whilst so far 61 flats have already been purchased with public funds to provide "affordable homes" on the site, there is to be a further meeting between the Hackney Council and the government's Homes and Communities Agency (formerly the Housing Corporation). Its purpose is to discuss financing further purchases from Barratt. However this was not a development designed for social housing.

Meanwhile, with the clock ticking before its planning permission expires, OPEN understands that Barratt has yet to satisfy any of the planning conditions before it can start to build its towerblocks on The Slab in Dalston when it is handed over to them on 1st October.

This artist impression shows, on the left, Barratt's, 10-20 storey development on the Council's demolished Dalston Theatre site and, on the right, further blocks of up to 20 storeys to be built on The Slab over TfL's railway cutting.

In seeking to justify the £40 million expenditure on The Slab, to provide a bus-turnaround above the railway station, the authorities mentioned, at the meeting with OPEN, the benefit that "bus drivers won't have to drive all the way to Walthamstow to get a cup of tea". So there's a comfort.
Posted by About OPEN Dalston at Monday, February 23, 2009