On 4th September, the Council granted planning permission to the London Development Agency to demolish Dalston Theatre and Georgian houses and redevelop the site with towerblocks. The Council claims that whether any of the historic buildings can be repaired and reused is irrelevant. It claims that only with permission to build towerblocks would the proposed sale of the site to Barratts raise enough money to fund TfL's £38million neigbouring bus station development and that these developments are a once in a lifetime opportunity to “regenerate” Dalston which must not be missed.

If reuse of any of the historic buildings is to be considered then OPEN must start new Court proceedings to challenge the permission granted to the LDA.

The Dalston Theatre was occupied last February when the Council granted itself planning permission to demolish the buildings. In response to recent developments the Theatre's occupiers have issued a fresh call to resist the demolitions. 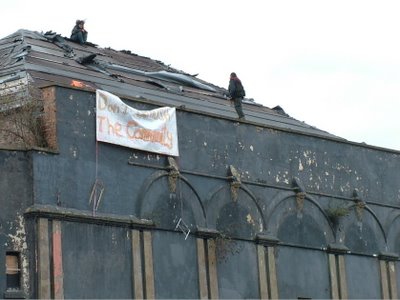 Neither the Council's Mayor nor its local Councillors nor the LDA have attended any of OPENs public meetings despite invitations to do so. Last May OPEN again invited the Council to meet to discuss its concerns but this proposal was ignored. The Council are reported in the press to now want dialogue and not further court action.
Posted by About OPEN Dalston at Thursday, September 21, 2006