Save our Past. Save our Future

On 30 March Hackney Council granted Transport for London planning permission to build a £39million concrete slab above the new Dalston Junction railway station and a bus station, a 20 storey tower and other blocks of flats and shops on top of the slab. All the flats will be for private sale. The photo shows the scale of the development. The government has said it will not intervene - because the bus/rail interchange development is "an essential part of the transport improvements required for the London Olympics 2012". 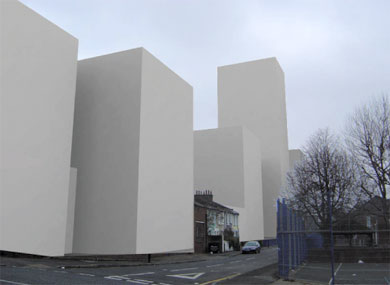 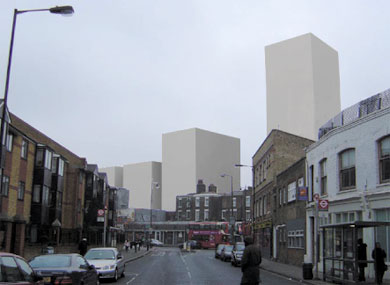 The Council also wants to sell a 125 year lease of its own neighbouring land to a developer. On 13 July it granted the London Development Agency planning permission to demolish Dalston's historic buildings and build 19 and 10 storey towers and other blocks on its land. 75% of the flats will be for private sale.Of all 533 new flats on both sites, only 28 will be for rented social housing. 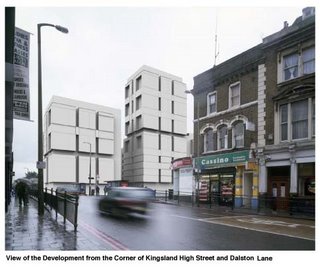 The authorities say the demolitions are needed to maximise the profit from the Council's site to pay for the concrete slab on TfL's site for which there is presently a £19million funding shortfall.

TfLs bus/rail interchange is to benefit London-wide commuters but why the Council have agreed with the authorities that Hackney's tax payers are to fund TfL's development, and that Dalston must be blighted, remains a mystery. The agreement is "confidential".

The demolitions include the 1886 former circus entrance, the oldest in the country, at 12 Dalston Lane - more recently the legendary Four Aces reggae and soul music club.

The Council made these decisions despite a year of public consultation when hundreds of objections were made to them. The consultants' reports now reveal that the authorities had already agreed last year that profit from developing the Council's neigbouring land would be used to fund TfL's private development - and not to finance affordable homes, open green space and refurbishing our heritage buildings to benefit our present and future community.

“Con” - noun: a complicated confidence trick planned and executed with great care; - verb: to deprive of by deceit; - colloquial: abbreviation of consultation

Save our past. Save our future.

The developers will not be building the new Jerusalem in Dalston but towerblock flats for sale which will overshadow and blight the area. They may be seen as a buy-to-let opportunity to house a transient population and become the slums of the future. We will see our children living at height with nothing for them except a tiny dark playground at the bottom of the canyon between the skyscrapers. It is a hypocritical betrayal of Dalston’s community, and of hard won Council policies, to condemn future generations to this and wipe out our childrens’ and grandchildren’s heritage into the bargain. We do not want to live in the past, but we do want to live with it. 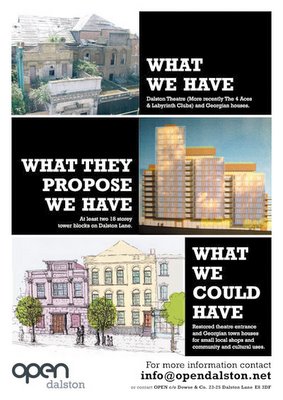