Boris Johnson, Mayor of the Greater London Authority, has replied to a question concerning his agency, TfL's, profit led development proposals for Dalston's Western Curve. The question was asked by local resident Andrew Boff who is Leader of the GLA Conservative Group on the London Assembly and scourge of bureaucratic wastrels. Watch the video here:


TfL is an agency of the Greater London Authorty and has applied for planning permission to build a major gated community above the Western Curve railway tunnels which run north west from Dalston Junction and which will have no public green space at all..

Boris is nominal boss of TfL but may also have planning powers as the GLA's Mayor over the Western Curve scheme. He says, of TfLs proposal, "Nemo iudex in causa sua" . In Dalston we say "Audi alteram partem".

OPEN Dalston objects to the scheme as presently designed and you can read our analysis of the scheme here and here.

Since April we also have been asking TfL to provide green space on  its other sites in Dalston for which it has no plans presently. Boris hints that there could be "improvements" there.

The Council's public consultation on the scheme officially closes today has been extended. We advise you to submit comments by 23 January so they can be reported at the Planning Committee hearing expected (presently) on 6th February . You can send comments to Hackney here and we urge you to do so. 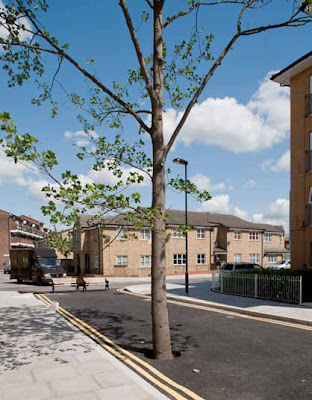 Despite the severe deficit of public green space in Dalston, TfL's development partners, Taylor Wimpey, have said that "the only viable opportunity for open green space will be that for use by the residents and guests of the proposed scheme".

Despite the damage to local heritage which TfL have already inflicted on Dalston, with its Dalston Square scheme, the effect of TfL's new scheme will  also leave listed and heritage buildings locally without " acceptable sunlight access to the buildings"  and only 10 out of the 108 new flats in the proposed gated community will be for affordable social rent. (Will Boris waive the rules on heritage and affordable housing, like Ken did on Dalston Square? - Ed.)


Posted by About OPEN Dalston at Thursday, December 20, 2012