Hackney has entered a development agreement with private contractor, Murphy, which now proposes the complete demolition, rather than restoration, of the Georgian houses at Nos 48-78 Dalston Lane. In 2005 English Heritage had declared the houses to be "remarkable survivors of Georgian architecture", and a "conservation led" project was to be the centerpiece of the newly designated Dalston Lane (West) Conservation Area. Now, due to years of neglect and vandalism, Hackney's plan is to demolish the houses and redevelop with front facades in "heritage likeness". 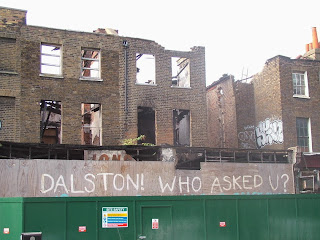 'Jon's Scooters' at Nos 62-64 suffered an arson attack and deliberate vandalism in 2004. Nothing was done to shore up, or rebuild, the houses which quickly deteriorated. There were two mysterious fires in other shops as well.

Hackney inherited the sixteen houses in 1984 when the GLC was abolished. In 2002 it ignored the shopkeepers' offers and sold them all, as one lot at auction, for £1.8million to an off-shore developer. Hackney refused planning permission for demolition and redevelopment in 2004 but, whilst awaiting the developer's appeal, two of the houses suffered an arson attack. The Council subsequently demolished Nos 60, 62 and 64, at public expense, in September 2007. Then, in 2010, it bought back all the remaining houses and the three demolished sites for £3.8million - double what it had originally sold them for at auction.. How would Hackney get its money back? (Don't you mean our money? Ed.) 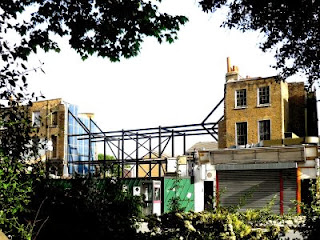 Hackney demolished Nos. 60-64 following the fire damage and deliberate vandalism, and propped the neighbouring houses. No other attempts were made to repair or preserve the remaining houses whilst in the developer's ownership or after Hackney re-purchased them

The findings of the most recent structural survey, which Hackney accepts, state that "the façade of Nos 48-78 Dalston Lane had significantly deteriorated due to general neglect, weathering, fire damage and subsequent water damage " and is "generally in poor condition throughout, having suffered significant general deterioration". 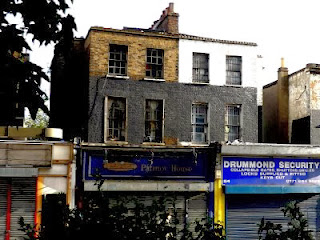 In 2009 many of the houses were painted black to obscure graffiti. The structural engineers have advised that "The areas of brickwork previously rendered or painted could not withstand the required cleaning process."

In October 2012 Hackney eventually granted itself planning permission for re-development.The permission is to convert the upper floors into 44 flats, including adding a mansard storey, and was to include renovation of the existing Dalston Lane facades and shop fronts. But the structural engineers have now advised that it is "impossible for the facade to support any additional loading that may be imposed by the proposed additional floor at mansard level"  and that it would be "unsafe to attempt to retain the facades following any future demolition of the internal walls, floors or remaining roofs" because "there would be a high risk of collapse". However the Planning Committee voted for partial retention, not total demolition.

This artists impression shows the latest plan to redevelop the terrace. Murphy will have a 125 year lease and market all the new flats privately, with no affordable housing. It will lease the ground floor shops back to Hackney.

Of the existing shop fronts, they have also suffered severe deterioration, except for those of the two surviving businesses, 'Sound and Music' and 'Hy-Tec'. Of those, the surveyors comment, "the shop fronts to Nos 48 and 66 are to be retained however it will not be feasible to retain these in place without damage occurring during demolition and construction and they should be dismantled and stored off site". Mouldings are to be taken to enable reproduction of some of the decorative features of the shopfronts. 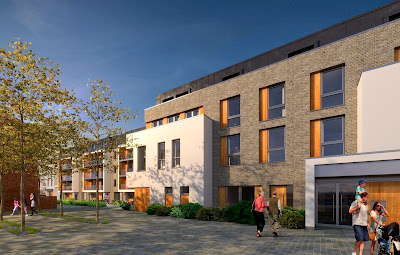 The backs and interiors of the existing terrace houses are to be demolished and redeveloped as flats. Open space will be created by taking in some of the estate car parking, which Hackney will compulsorily purchase.

The Dalston Lane Georgian houses have had a sad history. It was once a thriving street of independent businesses but tenants' leases were not renewed, shops were boarded up rather then relet, and no repair and maintenance was done. Despite the Dalston community's campaign, and Hackney's stated commitment to the historic environment, all are now to be demolished. We are now left to hope for a quality scheme and that new commercial tenants can be found for the ground floor shops.

Artists impression of the proposed redeveloped terrace, with reproduction shopfronts, additional mansard roofs and glazed in-fills between the pairs of houses.
Posted by About OPEN Dalston at Friday, December 20, 2013