You can help by donating money (see below). You can also help by buying a limited edition SaveDalstonLane T-Shirt and a useful Tote bag with designs by Tod Hanson. Send an email to savedalstonlane@gmail.com with details of your order and your address for postal delivery. 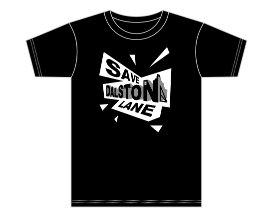 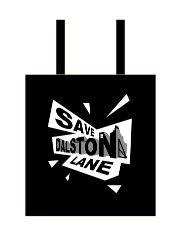 These handy Tote bags, bearing the Tod Hanson design, cost £10 each. By wearing the T-shirt and carrying the Tote, or giving them as presents, you can spread the word!

You can also donate money to the legal fund to pay for barristers and Court fees. £0000's have already been donated. It is the small sums that have really been adding up!! But £0000s are still urgently needed if municipal vandalism is to be defeated.


If we win and are awarded legal costs, donations of £20 or greater will be refunded, pro rata, after all expenses and legal costs have been paid.

Help the fight against municipal vandalism and greed

The Vandals: an eastern Germanic tribe which earned notoriety by sacking Rome in the 5th century, but which was later defeated by the Goths.
Vandalism: the gratuitous anti-social destruction of the environment and artistic creations.
Municipal vandalism: the destruction of our cultural heritage by corporate ignorance, deliberate neglect, greed and vanity, all in the name of regeneration, progress and necessity.